In this 2012 file photo, a tube of Naloxone Hydrochloride, also known as Narcan, is held up. Narcan is a drug used to counter the effects of opiate overdose. (Charles Krupa/AP)

“The irony there is that we’re taking the money away from drug dealers and using it to pay for life-saving medications of people that they get addicted to this drug,” Gloucester Police Chief Leonard Campanello said.

Here’s how it works: When an uninsured person walks into a particular pharmacy and asks for Narcan, the pharmacy sends the bill to Gloucester police and the department picks up the tab, Campanello said.

“We’re initially offering each person that comes in one supply every 30 days so that we can make sure we at least get a supply to everyone who comes in in Gloucester,” he said.

The partnerships with local pharmacies are part of a new approach by Campanello’s department to deal with the opioid epidemic that is affecting Gloucester and other communities in Massachusetts. Campanello said the department felt the need to step in when they learned it could cost up to $120 for Narcan if you don’t have insurance and just a few bucks if you do.

“We weren’t going to make a distinction … on whose life was more valuable,” Campanello said.

“You cannot look into the eyes of something like that and kick it to death.”

“A gang of vile thugs shot dead a vixen then set about killing her defenceless cub by kicking it as it lay cowering just inches from her dead mother.

The poor animal was only saved when a hero fisherman risked his own life to intervene and was assaulted himself.”

Read entire article: Fisherman risks own life to save baby fox from being kicked to death by thugs – Mirror Online.

“They swept through the storm like jagged bolts of lightning, flashing from cloud to cloud; they moved like the thunder’s roar, like the swell and rip of the hurricane. It was a crackling, impossible journey. There was no fear: only the power of the storm, unstoppable and all-consuming, and the joy of the flight.”
-p. 411, American Gods

“Writers seem to me to be people who need to retire from social life and do a lot of thinking about what’s happened–almost to calm themselves.” 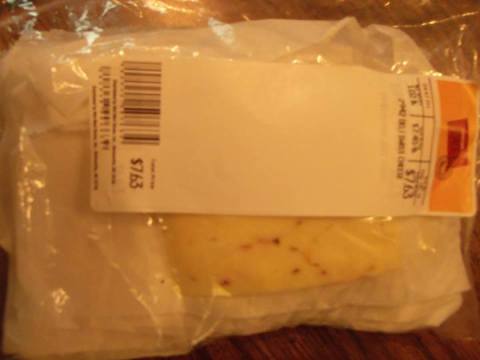 So I bought this pepper jack #cheese at the #Walmart #deli counter tonight. If you look close, you can see that there is a second label placed over the original.

The $7.63 price on top is for some boring Swiss cheese that I didn’t purchase. Under that label is one for $6.63 which also shows the correct cheese, which I ordered and watched her slice on the spot. She obviously put the correct one on first, then covered it with this bogus one. If it was the other way around, I’d think she mislabeled it the first time, then corrected it. In THIS order, the only possible explanation is that it was intentional.

This is where it starts to disturb me a bit more. Due to the fact I would be taking this to a random checker and paying the “Swiss price”, there’s no potential for profit to the deli girl in this scenario. She doesn’t take payments, nor could she have something going with anyone else to profit from this in any way. Further, there’s no way she’s doing this just to keep inventory in line when she sneaks Swiss out in her bra since she’d just have a similar inventory shortage of pepper jack!

That leaves only one of 2 possible recipients of this switcharoo: Either the deli or whole store is scamming the company for bonuses and so on due to reduced “shrink” from sneaking this kinda crap in repeatedly to make up for employee theft, shoplifting, damaged items, etc. that normally factor into this rather important retail statistic. If it’s not this individual location (Walmart #5462, Vancouver, WA), then the other possibility is that Walmart is pulling this scam company-wide. Assuming they manage to do this to 1 in 4 customers, the extra dollar per 4 customers would make a hefty sum when they apparently have 100 million customers a week. That’s a lot of thievery.

Either way, Walmart, whether locally or worldwide, is training its employees to do things like this, and fuck us if we don’t like donating dollars to Walmart. This isn’t the first crap like this they’ve pulled. Several years ago a bunch of employees verified some suspicions that stores were adjusting shrink numbers by sneakily spinning the bag turnstile in such a way to guarantee lots of people leaving a bag or 2 behind.

Funny, I used to be an Architect

You are more introverted than extroverted. You are more intuitive than observant, you are more feeling based than thinking based, and you prefer to go with the flow rather than having a plan. Your type can best be summarized by the word “Healer”, which belongs to the larger group of idealists. You have a capacity for caring that is deeper than most. You strive for unity, are fascinated by the battles between good and evil, and can be something of an idealist. Only 1% of the population shares your type.

As a romantic partner, you are usually supprtive and nuturing, however, you have a high need for individuality. Harmony is extremely important to you as you are very affected by conflict and tension, which also makes you resist confronting your partner directly about problems. When you get angry, you usually blame yourself, rather than your partner. You can also be stubborn and unyielding when you feel you are being criticized or mistreated. You feel the most appreciated when your partner listens to you carefully. You need to be understood. You need to hear your partner express their feelings, the more often, the better. Your group summary: idealists (NF)

Results from The Quick and Dirty Personality Test (Read more about the Keirsey Temperament Theory here.

Funny, I used to be an Architect.

And something about working in a notebook frees me up to make this mess without worry or guilt. I can’t explain why exactly. I’ve tried to see if there’s a scientific basis that connects working longhand with uncritical creativity, but evidence for that notion seems pretty scant. The actual work of shaping letters one by one, though, seems to turn off the part of my mind that hesitates and likes to second guess. My conscious mind kind of goes away. I think it helps that I know my notebook is just for me, a private thing, almost like a diary. The work becomes a recorded daydream.

And if we had basically no gun restrictions…whoops. We don’t. And gun crime is rampant, and accidental shootings as well, and mass slaughters are becoming more and more common.

One political party in America wants to have meaningful regulations, regulations that would not infringe on the right to gun ownership any more than speed limits infringe on the ability to drive your car. The other party wants mayhem and murder, crime and terrorism, mass shootings, 5 year old boys shooting their 2 year old sisters, and they will fight to the death to keep as many of those things happening as possible.

Sometimes life is very simple: Democrats are good people, Republicans are evil. May the Force be with us, always.”

‘Most Threatened’ Tribe Sees No Relief from Illegal Loggers | LiveScience

“A deadline to remove illegal loggers and settlers from the lands of one of the most threatened tribes on Earth appears poised to pass without action in Brazil.

The Awá, a tribe of about 450, have won multiple legal battles granting them the rights to their territory, which are also guaranteed in the Brazilian constitution. But enforcement of those rights has been lacking, with reports of illegal logging camps operating only 3 miles (5 kilometers) from one Awá settlement.

“It’s a complete joke, really,” said Sarah Shenker, a Brazilian campaigner for Survival International, a group that advocates for the rights of indigenous people.

A judge, in a declaration published in March 2012, ordered the eviction of illegal loggers, settlers and ranchers from Awá land within a year. Even with the March 31 deadline approaching, no one has been removed.”

ANXIETY is the body’s way of responding to danger. It’s a survival mechanism designed to keep us alive.

But the danger we perceive doesn’t actually have to be there. We just have to think that it is.

Whether the danger is real or imagined, our automatic survival mechanisms will kick in and we will try to escape or avoid the danger.

We might avoid certain people or places. We might refuse to go out. Perhaps we’ll only go out with someone else present and then leave early.

If we choose to face the danger, we might use coping behaviours to get us through, like smoking more, fiddling with our clothes, avoiding eye contact or taking medication.

Whilst our coping behaviours get us through the perceived danger, they actually keep our anxiety going. As long as we depend on them to cope, we don’t give ourselves the opportunity for the anxiety to go away on its own.

Learning to confront our anxiety might be uncomfortable in the short term, but it helps us take control and feel better in the long term.

If you feel anxiety starting to overwhelm you, ask yourself if you have any proof that what you fear is actually going to happen. What is the worst that could happen and how would you cope with it if it did? Imagine it is six months from now. How important will this feel then?

A politics and current events blog

I want to be rich. Rich in love, rich in health, rich in laughter, rich in adventure and rich in knowledge. You?

IN MEMORY EVERYTHING SEEMS TO HAPPEN TO MUSIC -Tennessee Williams

My reflections of life in general.

Listen to your inner self..it has all the answers..

All Things Writing and Geek, in one neat little blog!

Humorous fantasy fiction author... the books are quite funny too... seeking an agent, a publisher and my fortune.

If you want to be a hero well just follow me

Come view the world from my loft

Prime my subconscious, one hint at a time

philosophic topics and the arts

Daily Thoughts and Meditations as we journey together with our Lord.

O at the Edges

Musings on poetry, language, perception, numbers, food, and anything else that slips through the cracks.

Capturing moments of happiness every day...

Speaking Out on the Unspeakable

Musings and books from a grunty overthinker

It's time to get hella serious about writing!

One Hell of an Apprenticeship

Writing the universe of Onslaught

“Throw your dreams into space like a kite, and you do not know what it will bring back, a new life, a new friend, a new love, a new country.” Anais Nin

For Readers, Writers, and Believers in Love

(re)Living History, with occasional attempts at humor and the rare pot-luck subject. Sorry, it's BYOB. All I have is Hamm's.

Musings of a speculative fiction writer

A blog full of humorous and poignant observations.

I am a Honey Bee

All about my adventures with cooking, crafts, and travel

What Inspires Your Writing?

A blog dedicated to writers...and the people, places, and things that spark their creativity

Tales from the mouth of a wolf

Bringing you yesterday's news from Japan and Asia, today.